Op Ryan Phase 1 was conducted over 8 waves from 25 January until 21 March 2020 when operations were suspended due to the COVID-19 outbreak. TRA Greyshirts were supplemented by International Augmentees from Norway and the UK, along with Corporate Volunteers from Minderoo Bushfire Foundation and Allianz as well as Spontaneous Volunteers.

The operation was based in Cobargo in the Bega Valley Shire, which was one of the regions heavily impacted by the bushfires in December 2019 and January 2020. The FOB and IMT were located at the Cobargo Sportsground under arrangements with Bega Valley Shire Council, who ably and effectively supported TRA activities. Op Ryan also worked collaboratively with a number of organisations, principally BlazeAid and Fire Relief Run.

The official loss of residences numbered 448 and this helped in establishing the operation’s priorities. Op Ryan received referrals from a range of organisations which included the Bega Recovery Centre and Lifeline and these referrals were given the highest priority if judged within the scope of mission and wave capability. A number of these referrals related to clients’ mental health, and by attending and completing suitable tasks, Strike Teams were able to provide a level of ‘covert’ mental health support. Of significance, Strike Teams were assisted by items of small plant which had a considerable ‘force multiplier’ effect on task completions.

Notably, Op Ryan was the first TRA operation to be overseen by an appointed State Commander, who provided oversight, mentoring support and a single point of contact (less occasional technical contact) for the wider TRA organisation.

Sorry, but we currently do not have content for this section.

Sorry, but we currently do not have content for this section. 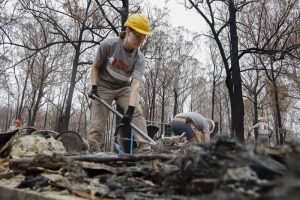 With Disaster Relief Australia, your dollar does double time. Not only are you able to help communities devastated by disaster, you are also supporting Australian Veterans find purpose through service Read More »